Martin Luther King Jr. once said that “a riot is the language of the unheard.” On PTSD (Deluxe), Chicago-rapper G Herbo is pleading to be acknowledged and heard. The 24-year-old rapper has released the deluxe edition to PTSD (which originally released in February of this year), arriving in the midst of national unrest.

When Herbo raps, it’s in part with the hopes of healing, himself. But he’s also sharing a warning about the state of the nation and the realities of life for him and those he came up with: “I’m just tryna do right by my people … And the government wasn’t there when we needed you,” he spits over the militant Don Cannon-produced “Trenches.”

On the original cover art, G Herbo holds aloft an American flag, ragged and torn with bullet holes. It looks as though he is holding the last remains of a destroyed home. But on PTSD (Deluxe), Herbo is holding the same flag emblazoned in a teal blue, but with bullets flying away from him and towards the camera. He has seen enough and is fighting back.

Released in the wake of George Floyd’s murder, as protests in Minneapolis are spreading across the nation to places like Atlanta, New York, Chicago and Denver, Herbo’s latest has taken on an especially haunting meaning. As rioters continue to express the need for a widespread assessment of police brutality and institutional racism, PTSD (Deluxe) is a fitting musical companion to the perilous state of the country. 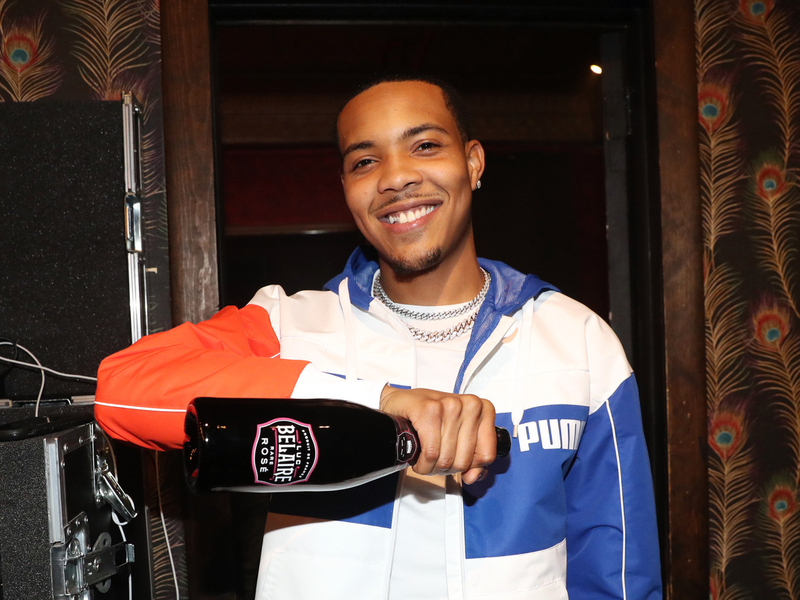 For the newest release, G Herbo adds 14 new tracks to his already critically acclaimed project. Many deluxe editions of albums are compiled with filler and studio extras. There is practically no excess on this deluxe. Instead, listeners are gifted with what could be a full-length LP on its own — complete with structure, complex ideation and thoughtful, candid narratives.

Like its predecessor, PTSD (Deluxe) is a walk through the trials and tribulations of Herbo, his rise to success and the various obstacles that he overcame along the way. “Friends & Foes,” gives way to Herbo as he spirals deeper into the trauma which lives in his own mind. The tempo starts slow and steadily builds to a full, booming sound that matches Herbo’s soul-piercing bars.

“Cap Guns,” which aptly follows “Friends & Foes,” is the real-life tale of a gangster, told without bells and horns — it’s raw, but balanced beautifully with a whistling vocal which swirls above a thick bass drum. Herbo has made it; that much is clear on the Zaytoven-produced “Spam 2 Lam.” The track is a pinnacle of sorts — Herb waxes from above his competition about his journey, what it took for him to get there, and all he lost along the way.

Perhaps most importantly, PTSD (Deluxe) sets the standard for rappers to be vulnerable and open about mental illness. Herbo’s unfiltered and frank commentary about his own PTSD diagnosis paves the way for MCs to follow suit.

There are a few misses on the project; “Like This” featuring Lil Uzi Vert is a rambunctious track about flexing cash, cars and girls that feel very out of place in the middle of political commentary. “In a Minute” is a repetitive and banal track that could have also easily been cut.

G Herbo’s pure humanity is what makes PTSD (Deluxe) such a compelling success. He’s found power in his story: at times he’s anxious, at times he’s angry, and at yet other times still he’s content and grateful for where he is today.

It’s the story of an American human and a rapper.